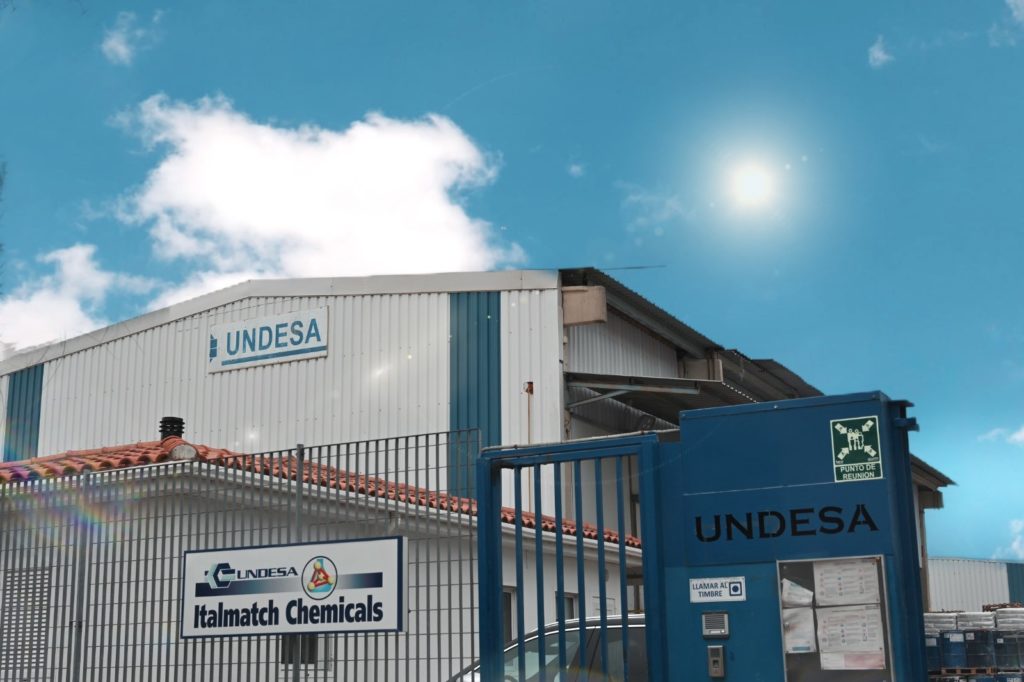 UNION DERIVAN, S.A. (UNDESA) is an oleo-chemical company and is a leading manufacturer and supplier of oleo-chemical products used as raw materials and additives in different sectors such as plastics, rubber, construction, detergents, cosmetics, paints and varnishes, resins, metalworking, pharmaceuticals, etc. The offices are in Barcellona and the productionfacilities are in Zuera (30 km outside of Zaragoza), Spain.

Undesa has been acquired by Italmatch Chemicals Group in 2012. Today, Undesa facilities are the heart of oleo-chemical production of the Italmatch’s “Personal Care, Fabric Softeners and Plastic Additives” Business Unit.

UNION DERIVAN, S.A. (UNDESA) stems from the merger of several Spanish companies (Derivan / Kemichrom / Thomas) that have been present in the chemical market for more than 55 years. By processing and converting renewable natural raw materials we produce fatty acids, stearine and glycerine, as well as their derivatives such as esters, esterquats, metallic stearates, lubricants and P.V.C. stabilizers.

Today, the production site is organized in 5 departments:

Undesa plant received the ISO 9002 certification in 1995 and it has maintained its quality certification without interruption until the present day, currently with ISO 9001:2015.

Thanks to its commitment to the environment, the production centre has maintained its ISO 14001:2015 environmental management certification  since 2004.

Unión Derivan S.A., in their quest to improve its energy efficiency, has carried out a project to replace two steam boilers in order to reduce its energy consumption as well as CO2 emissions. This Project aims to achieve energy savings of 37.088 MWh/year and an emission reduction of 7.604 T CO2/year.
The project has been financially supported by the European Regional Development Fund, which granted an economic aid of 39.469€.

Unión Derivan S.A., in their quest to improve its energy efficiency, has carried out a project to replace the lighting of different areas to a LED lighting system, which will ensure energy savings of 67,38 MWh per year.
This project has been financially supported by the European Regional Development Fund, which granted an economic aid of 10.401€.